Posted May 5, 2015 by Alkan Chipperfield

Gypsy pedlars of coloured pills, they grin angelically while pushing their strange wares. Manufactured in underground kitchens beneath the labyrinthine corridors of the Beursschouwburg, where chymists have long been working to separate the green, red, yellow and pale white powders, the mode of dispensation is as important as the substance. An exacting artform, the visitor must first be diagnosed according to mood; thereupon the appropriate pill is indicated. The capsule is to be broken open and the powder inside tossed into the mouth. Effects may or may not be instantaneous or even perceptible; there is no recourse to antidotes. 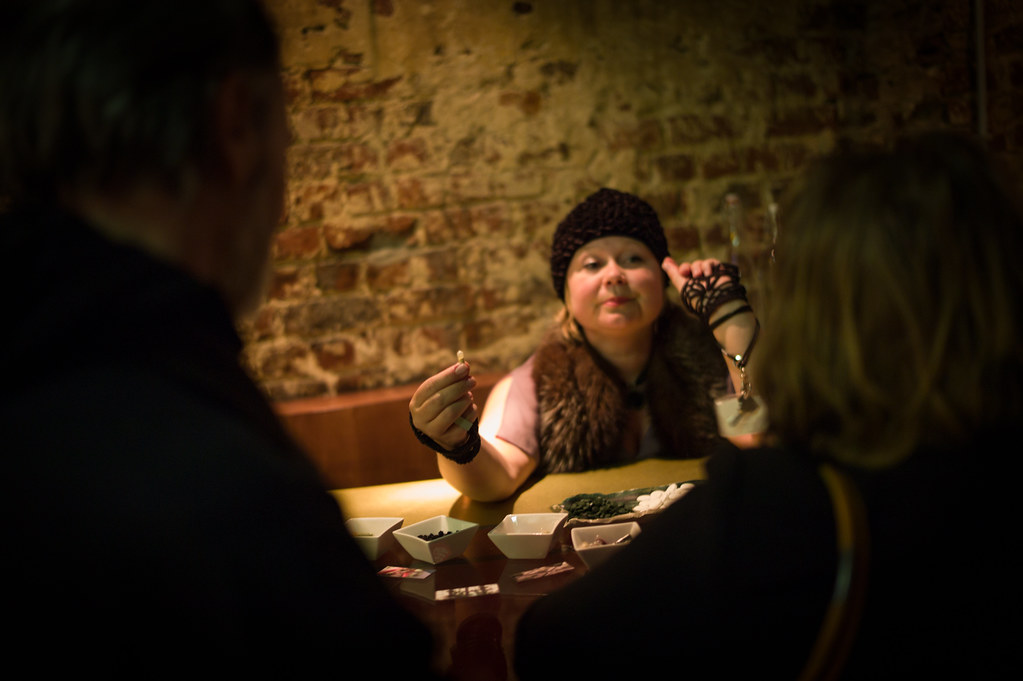 Gazing out from decaying collodion wet-plate prints with the haunted, obstinate stares of colonial pioneers in some alternate nineteenth century reality, their rigid, sombre comportment suggests ambivalence; stranded in a future that is taking far too long to catch up. Hands callused, backs broken from farming this fallow irreal ground, they stand proud and defiant in their peculiar anarcho-dandyist heritage. 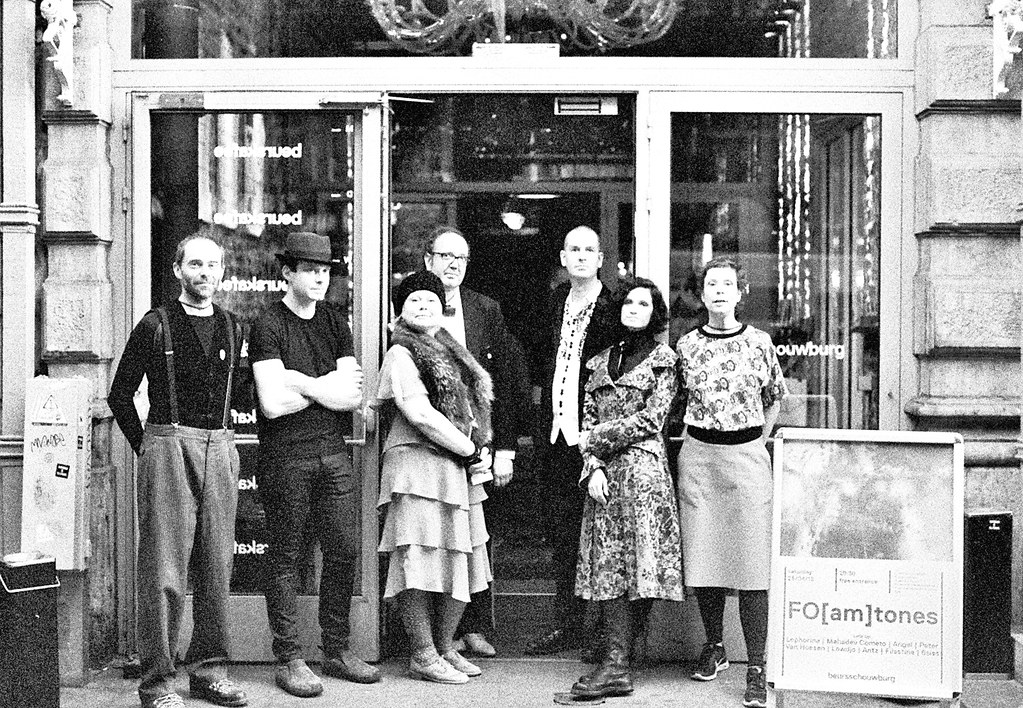 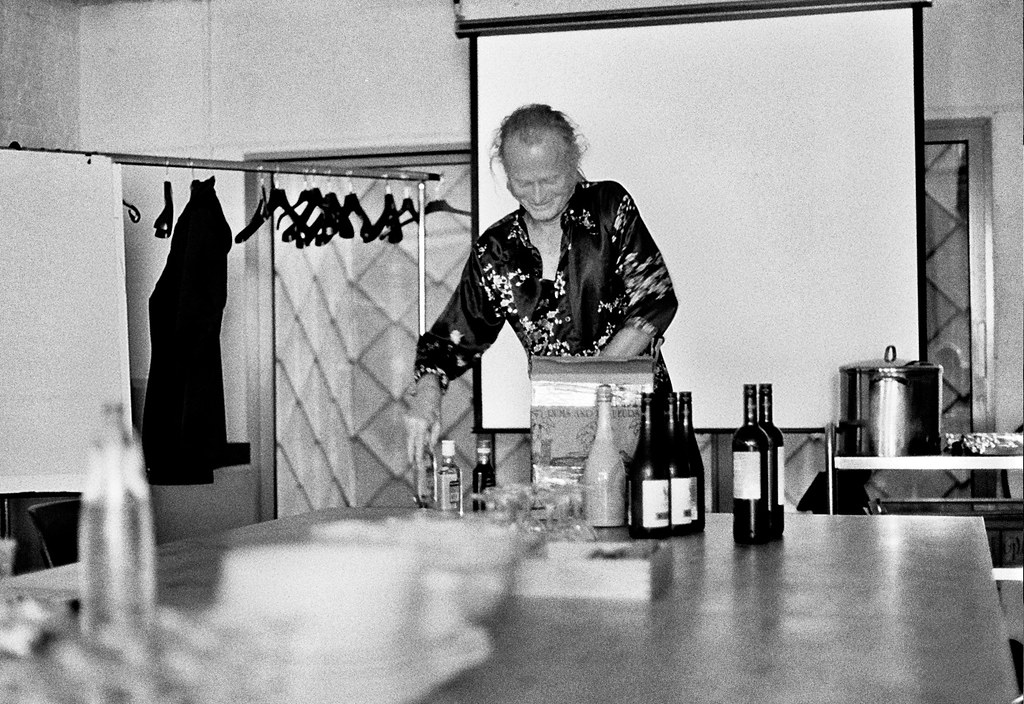 Seen from wide arched windows in a high room, the street below stretches far into the west under falling cobalt-blue twilight, the glittering traffic of pleasure seekers shimmering in flux as far as the eye can see. We have assembled here before the show: performers, scent artists, onlookers, technicians, sleep experts. A box of hip flasks is brought in. These are distributed, standard-issue, one to each of the performers, heady Jamaican rum ostensibly to help them get through the night. “Don’t drink it all at once if you’re performing last,” is the sage advice. 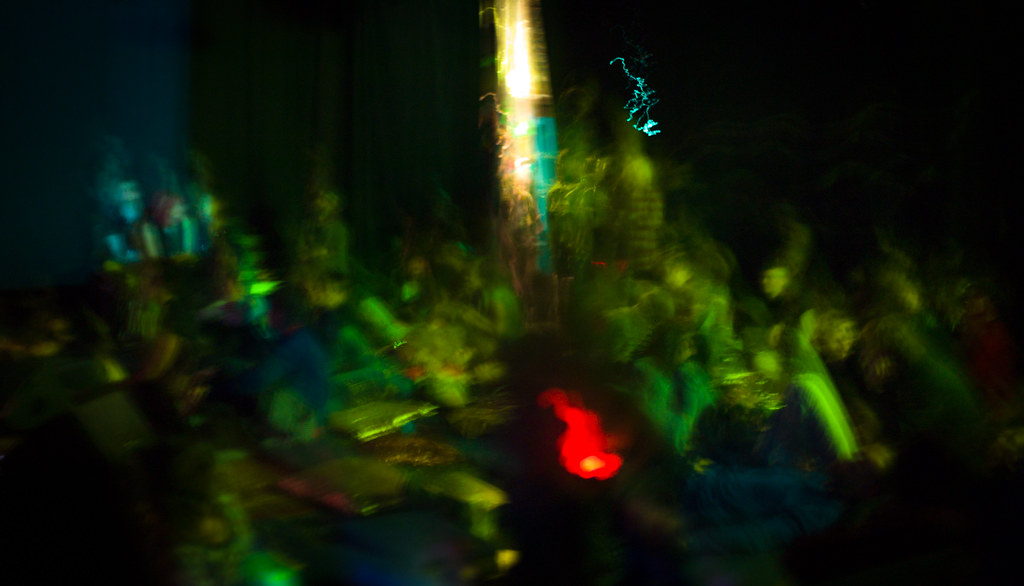 Cordoned off and cocooned by thick black curtains, the floor is covered with mats and pillows and bathed in decaying emerald green, or left to lie in complete darkness. Here you may yield and surrender to gravity for a short while. Initiands slowly file into the space and lie down, as mesmerising dark sonorities and dissonances begin to spiral through the air, tapering off or spinning uneasily into broken reverberations. Somnolent and plastic, you must lie down to sever the fine string ligaments that hold you upright, puppet-automated and stranded in waking. But once down in the dark, embracing sweet black tones that fall amidst the pillows or prowl around supine bodies like well-trained feline ghosts, can you ever resurface? Hypnotised by endless drones flying to and fro, perpetual moon ragas.

Almost indistinguishable in the sapphire-dim radiance, a shadowy sorceress of scents takes form in coils of faint smoke. Herself a being of smoke and shadow, she is everywhere and nowhere at once, absorbing and absorbed by the breath in a multitude of subtle odours. We have no words to describe such scents as are dispensed by this being, for they condense at the boundary where atma itself ignites and becomes perceptible in particles of stardust. Throughout the night she materialises and dissipates in curlicues and wisps of vapour; silently fumigating every nook and corner in whiffs of hazy microparticles, suffused and lingering amidst the otherwise mephitic steam of surging bodies.

An ode to the visuals, eclipsed by socio-radioactive decay from the half-life of collaborative breakdown. Exfoliating light patterns of leaves and vines, charred by the jarring friction between dream and waking, slice across the black ripples of curtains, then wilt in monochrome oblivion. But this obscure pathos goes largely unnoticed. It is an invisible drama that plays across the night and is absorbed in shadows. Ice floes and cataracts, absorbing embers and faces in the stone. A frozen gelid cosmos. A heavier structure of shadows and geometry; the sounds necessary to reach a physical escape velocity from the human condition, morphing into thick arteries of desire or glistening reflections of stained glass in dark eyes, the cross-hatched circuitry of optical illusion. 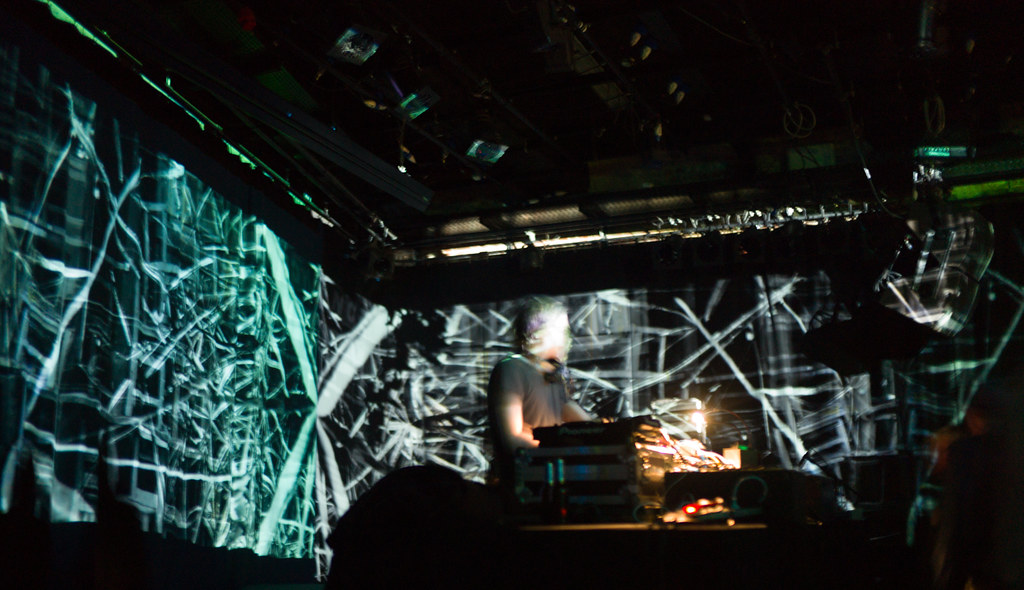 The sound densifies and tightens as a puzzling transition takes place: from repose in an astral dream of cosmos to a wakeful raga of chthonos. Little desultory riffs and voice samples eddy across the floor now and then; these small mutant creatures part company from the oncoming tide of beats to crawl behind the curtains and into the floor, where they grow long invisible tendrils of emotional perfume that coil up around dancers' legs and, inhaled, finally contaminate hearts.

Then the audio plenipotentiaries of Dionysus make their entry onstage; adorned in gothic eyeliner and dreadlocks that coil to the floor, they are here to deploy the mixer's sacerdotal science in building up appropriately dance-inducing sequences. Breaking up and breaking down in defiance of gravity or yielding, elated, to its embrace, a morphing parade of legs and arms blurs across the dancefloor in spills and squiggles of leaking light. In the cocooned particle agitator of the dancefloor, certain molecular structures are reconfigured in surprising albeit usually temporary new shapes. Limbs can separate from the body and fuse together with the appendages of mutual strangers, and the resulting creatures are not monstrous but fragile amoebas or jellyfish existing for the express purpose of redefining ecstasy. This alchemical process is aided by universal solvents and rhythms in the dark and will probably be reenacted for as long as humans adopt a biological form. 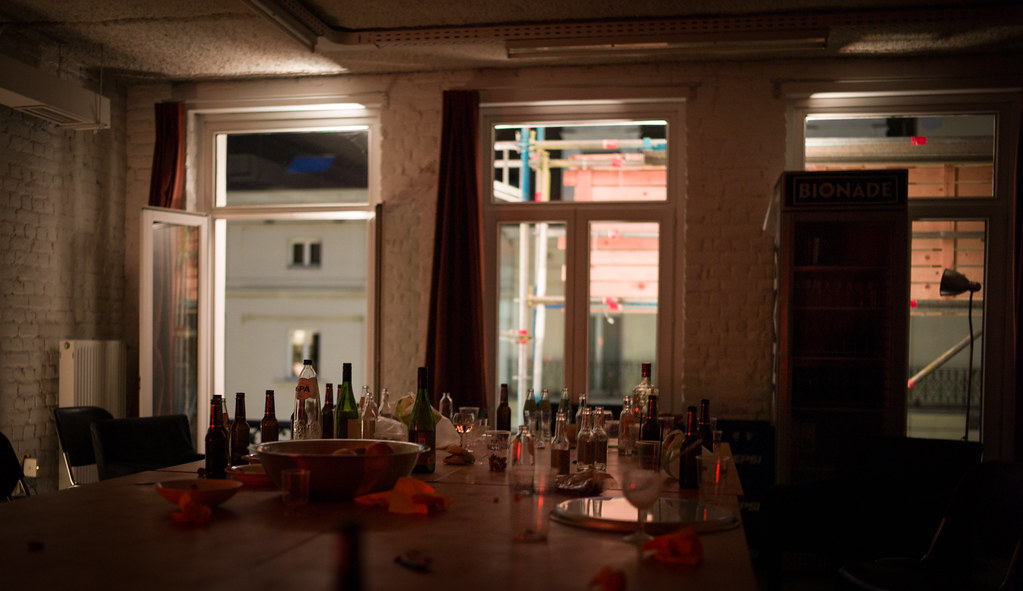 The surging influx of dancing bodies pushes all other corpuscles upstairs, and into the backstage. This is where certain subaural species are becalmed, washed up from the sea of sound below and stranded high and dry amidst empty bottles. In the heat of the night, this is not a place to be warmed. In the shapeless night, this is not where you want to take form. It is not true that backstage is the place to find a more authentic reality. This is where all elasticity is calcified by the cruder forms of nocturnal exhaustion; brittle and chafing. For you need the alchemy of dissolution, not dissipation; the spirits of levity, not drowning. (At least let the latter wait until tomorrow.) You dash round to the lift as its saving fluorescent glare spills into the foyer and you are shuttled down, back down to the lively cocoon. 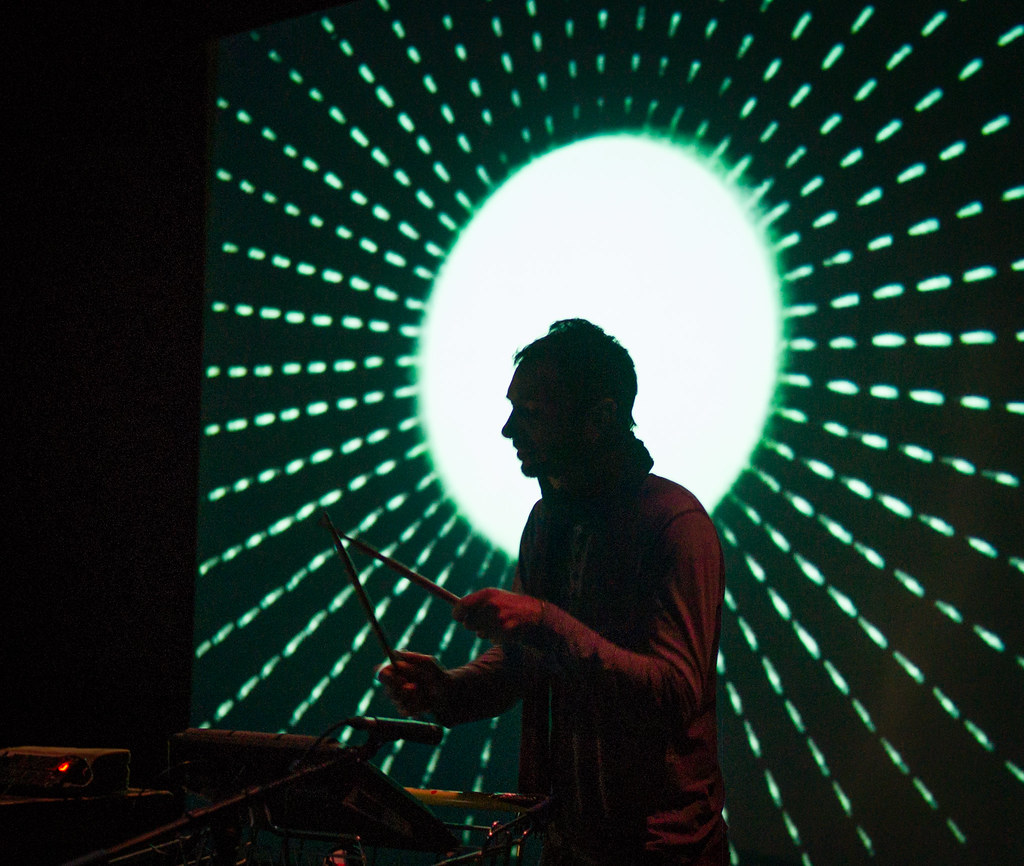 A strange figure emerges in the last throes of night: perhaps a mime or a wildly gesticulating circus performer, he enters stage drumming with a kind of gleeful and manic abandon, his arms flaying up and down through intensifying cascades of rhythm and light. The sheer childlike delight emanating from this enraptured harlequin figure belies the addictively, fiendishly danceable beats that catapult a 4 a.m. crowd into fever pitch – while incongruous, epileptic orgies of supermarket packaging explode relentlessly across the screen. The vertiginous, meticulously beat-mapped visuals segue seamlessly between abstract and overtly political imagery, leading up to a virtuosic shopping trolley cadenza attack that sets going a cascade of agitated percussive associations. 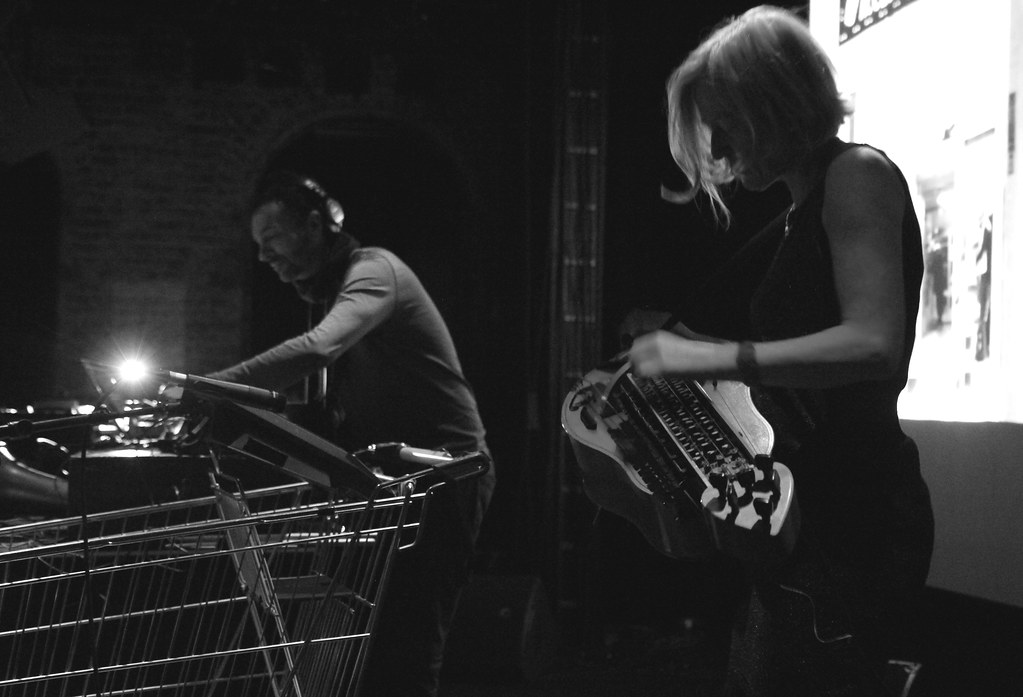 Direct from another dimension, the appearance of a fabled hurdy-gurdy player onstage inevitably fuses medieval harmonies into a lilting, pullulating drone-waltz, a lurching ostinato to carry us through the last dance. Sustain, reverb, decay: this penultimate act aptly sets the tone for the last, rapidly thinning hours of night, and the threat of coming dawn.

What has ever been more lachrymose than walking homeward through empty streets of the palest blue after a night of bacchic revelry? In this pure, limpid halflight everything fades to transparency: musculature, ligaments, the shape of a skeleton, the density of bodies, the memory of a touch barely grazing a thigh – smoother, softer, more electric than the finest polymer. Before the cacophony of yet another day begins, the street is leeched of gravity for a short moment, and commuters find themselves caught in its play of transient echoes and refractions, undifferentiated and weightless.